My friend Jamie Greening recently shared this picture on Facebook: 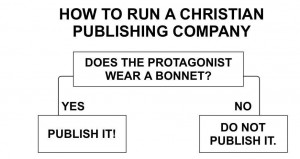 First of all, HAHAHAHAHAHAHA!!! It’s funny because it’s (sort of) true.

Second, I don’t know where the picture originally came from, but if someone tells me how to properly cite the source, I will happily edit this post with the appropriate information.

Jamie commented that an agent told him his novel was “unpublishable” because the main character is male and not Amish and the setting is not the 19th-century frontier.

Which sort of got me thinking… Could Connor Mac Niall pass muster as a CBA Sanctified and Vetted (TM) Hero?

No, really, hear me out. It’d just take a few minor tweaks.

Okay, let’s start in Chapter 1 of Ravenmarked. Hmm. Right off the bat, we see Connor committing the four cardinal sins of CBA publishing–he swears, he’s violent, he talks about drinking, and he ends the chapter in bed with a woman he’s not married to. Clearly, we have work to do.

The first words out of Connor’s mouth are “damn it.” I suppose that’s easy enough to change. How about just “darn it”? Or maybe “he cursed”? Shouldn’t be too tough. But it’s a little harder to change the spear fishing section. I mean, by the very nature of it, it’s a violent, bloody thing. I suppose he could fish with a fishing pole or a net. It would be less bloody, and maybe then people would just think he was being like Jesus or something.

It gets tougher further into the chapter. When the servant asks what he wants to drink for dinner, wine and a mysterious foreign drink are mentioned. Maybe the foreign, imaginary drink is vague enough to satisfy the CBA audience? Hm, better not take any chances (changes from original in brackets):

Connor set down the fish and [fishing pole]. “Deliver that to the kitchen. Prepare it however the lady wishes.”
“Yes, my lord.” The man kept his eyes lowered. “And wine?”
[Connor cringed. “Wine? Goodness, no! For I have sworn not to drink of the vine or the grain so that the whole of my focus may be upon serving Alshada!”]

The really tough part is at the end of the chapter when Connor’s paramour and employer, Helene, enters the room. Perhaps it should go something like this:

The crash of waves echoed in the room as she stood considering him. “I can pay you more.”
“You know that’s not how this works. [And you really should leave my bedroom before your servants begin to besmirch your reputation.]”
She [reached for] the blanket around his hips. “[But] I [can] have you until tomorrow, yes?”
[He stepped back from her and pointed to the door. “I will leave tomorrow, yes. And you will leave right now.”]

Look at Connor going all Old Testament Joseph on his employer! We’re on a roll now, aren’t we?

There’s still a lot of work to be done, though. How do we change the scene where Connor kills Braedan’s men who try to take Mairead prisoner? Perhaps he can just pray them away:

“Do you think I [care] what your orders are? I’m not turning this girl over to a group of thugs with nothing but an outrageous claim.” He [lifted his hands to the sky]. “I suggest you move on [before I call down the power of God].”
[The men immediately dropped their weapons. “Don’t risk it, men!” the leader shouted. “He has the power of God!” And they ran into the woods and left their weapons behind.]
[Connor dismounted and picked up all the weapons. He called Mairead down off her horse, and they dug a hole and buried all the weapons so that they would not do any more harm to anyone else ever.]

All right, we can change all the swear words, make Connor a pure and unsullied man who has never touched a woman, eliminate wine and spirits from every scene, and change Connor from a sheepdog to a sheep…

…and Ravenmarked would be a completely different book.

In fairness, I realize that I’ve created something of a strawman here. Not every Christian publisher, agent, or reader is so uptight about every little thing in a book. And also in fairness, I recognize that there are readers who, for whatever reason, need squeaky clean books. Ravenmarked is not the book for those people.

Ah, well. Ravenmarked has its audience, and while it may be small, it is passionate about the book. So I guess I won’t worry about changing things after all.

Connor Mac Niall is not a CBA hero… but he is a hero worth writing.