I’m back in Idaho again this week. Things are crazy, and I’m completely overwhelmed and trying to figure out how to fit fiction into my life right now, but every time we come back here, I fall in love with this town a little more. This trip really genuinely felt like going home, even though we still have almost no furniture, a skeletal kitchen, and a long list of projects (large and small) to tackle.

But as we were heading through Eastern Washington this time, it just felt different. Maybe it was partly because I knew the route better this time… Maybe it was that sense of approaching something known and familiar… I don’t know. I just know that as we crossed into Idaho, the excitement was more of a settled, relaxed excitement–that sense you get when you’re going home after a trip you didn’t really enjoy.

I took a long run along the river road here yesterday; it was exactly seven miles from my back door to the start of the gravel road and back. Along the way, I snapped a couple of pictures of the view. 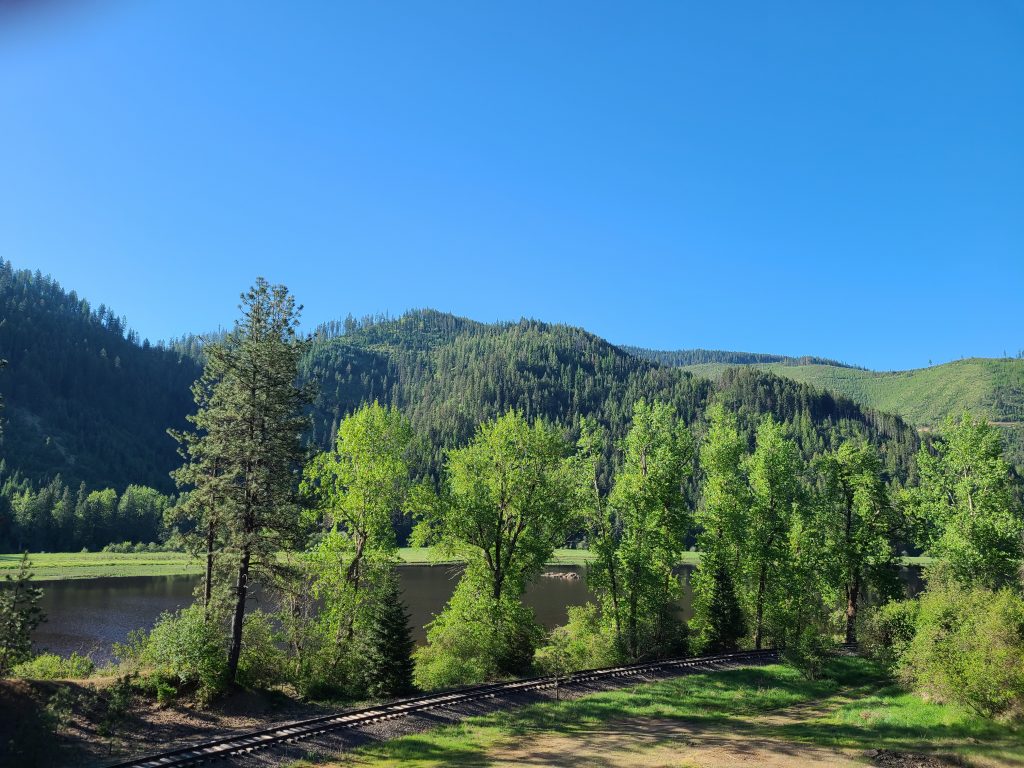 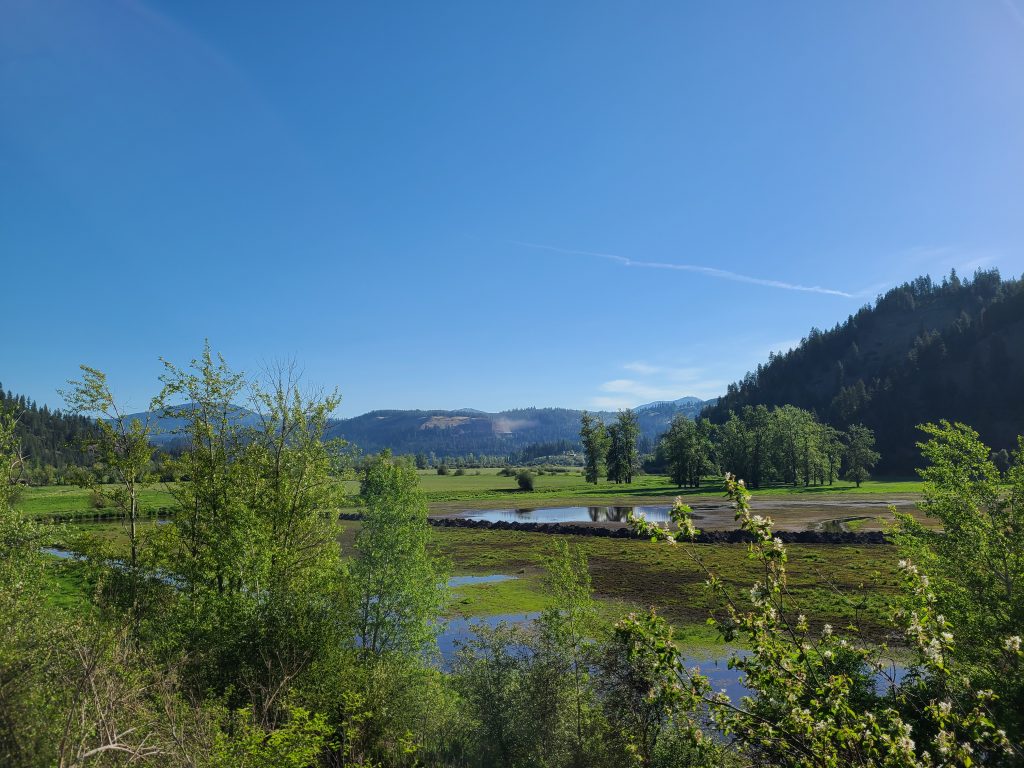 The marshy area is full of ducks, and when we drove down this road one evening, we saw many, many deer. This road has no lines and little shoulder, and you have to cross the train tracks twice, but people gave me a wide berth and a friendly wave as they passed me. It’s the same wave I remember seeing in my rural community growing up–that wave that acknowledges country and kinfolk and connection.

Aside from the fact that we have the Internet now, I feel very strongly that moving here is returning to my roots.

In any case, I don’t have any deep thoughts this week, so I thought I’d share a short snippet of Unquickened. This is the moment when Igraine and Connor finally meet. It may change a bit, but I think the flavor of their first meeting is right. Enjoy!

Igraine inclined her head toward the tribesman and promptly returned her attention to Connor Mac Niall. “Forgive me for startling you, my lord,” she said. “I saw you in the tavern, and I don’t have time to contact you through proper means.”

The burly duke crossed his arms. “I have rarely objected to meeting a beautiful woman in an alley,” he said. “But usually, she’s of more humble origins than the Eiryan royal family.”

Humbler origins… How could I even say at this point? She brushed off the comment. “Is there some place we might speak privately, my lord?” She gestured to Aiden and the tribesman next to the duke. “Along with our guards, of course.”

The tribesman snorted, and the duke silenced him with a look.

“Something amiss, my lord?” she asked.

The duke shook his head. “He’s just amused that you would call him my guard,” he said.

“Does he look like he needs a guard, my lady?” the tribesman said.

Igraine startled at the sound of the tribesman’s voice. “You speak Taurin,” she said.

The tribesman grinned. “Did you think we spoke only in grunts and clicks?”

Duke Mac Niall chuckled. He gestured to the tribesman. “Your highness, this is Edgar Wolfbrother, traitha of the wolf tribe and my own tribal father.”

“Tribal father?” Igraine looked back and forth between them. “I don’t understand—you are not Culain Mac Niall’s son?”

Mac Niall laughed aloud at that. “Of course I am,” he said. He looked around the alley. “Perhaps we should find a quiet place to talk,” he said. “You may need a lot of things untangled. Wait here.” He stepped toward the entrance to the alley with the tribesman.

Igraine took a step back toward Aiden. “You are certain that’s him?” she whispered.

Aiden nodded. “I overheard the other duke call him ‘Connor,’” he said. “And he fits the description of Duke Mac Niall.”

Igraine’s mouth tightened. “He’s not what I expected.”

“I think he prides himself on not being what people expect, your highness.”

Igraine sighed, watching the two men at the alley entrance, waiting. She had told Gwyn and Deirdre that she had a headache and wished to retire for the day, and as soon as they had left her room with assurances of caring for Quinn, she had changed into plain attire and slipped out of the house with Aiden. Once they arrived in the castle district, it didn’t take long to hear that several of the dukes had arrived and to learn that they frequented the Sheep’s Head. Sitting in one corner of the common room, they’d simply waited for a man of proper standing to arrive.

Igraine had no idea if her plan would work. It all hinged on finding a sympathetic duke—someone with enough power to stand up to Rory and her father, someone who didn’t mind ruffling feathers, and someone who would prefer Braedan on the throne to any of the other options. She knew little about Duke Mac Niall personally, but she did hope that Braedan’s act of restoring his lands and name would make him sympathetic to Braedan and, by extension, her. He’s the likeliest one, she thought. Fingall isn’t strong enough, and Dylan isn’t here. But Mac Niall seems… A chill ran down her spine. Dangerously ideal, if he will consent.

Mac Niall finally motioned them forward as the tribesman walked away, and she pulled her hood up over her head, tucking her hair back as far as possible. “I assume you don’t want to be seen,” the duke said in a low voice as she stopped next to him.

“I would prefer that, yes.”

He nodded. “The Sheep’s Head is a bit crowded. There’s a little inn over there. Edgar will get a room for us.”

She swallowed hard. “You must understand,” she whispered. “I cannot be recognized. If this innkeeper suspects…”

“Then keep your hood up and follow my lead,” the duke growled. His eyes flickered down to her for a moment, and he gave her a rakish grin. “Trust me, princess. I’ve managed to smuggle more than one beautiful woman in and out of inns in my life.”

She bristled and opened her mouth to retort, but Aiden touched her elbow and shook his head.

The duke saw it. “I understand why you want your guard to remain at your side,” he said. “But it might be best if he waits outside the inn to alert us to any trouble.” She started to object, but he held up his hand. “Remember, your highness—you sought me. If you don’t like my methods, go home.”

Igraine shut her mouth and inclined her head. “You’re right, of course,” she said. He certainly doesn’t seem to mind ruffling feathers.

Remember to check out other excerpts here and here. And please share–I need your help getting the word out so I can quit my day work and focus entirely on fiction!

I may be quieter on the blog and social media for the next month or so while we finish our move. I’ve cut back on some client work to try to create a little more space in my life for fiction, but I’m not sure how well that will work in the midst of this move. But there is light at the end of the tunnel, and I am looking forward to the slower pace and small town life that awaits me here.

In the meantime… Onward!

2 thoughts on “A Little More “Unquickened””