And So It Begins… Again… 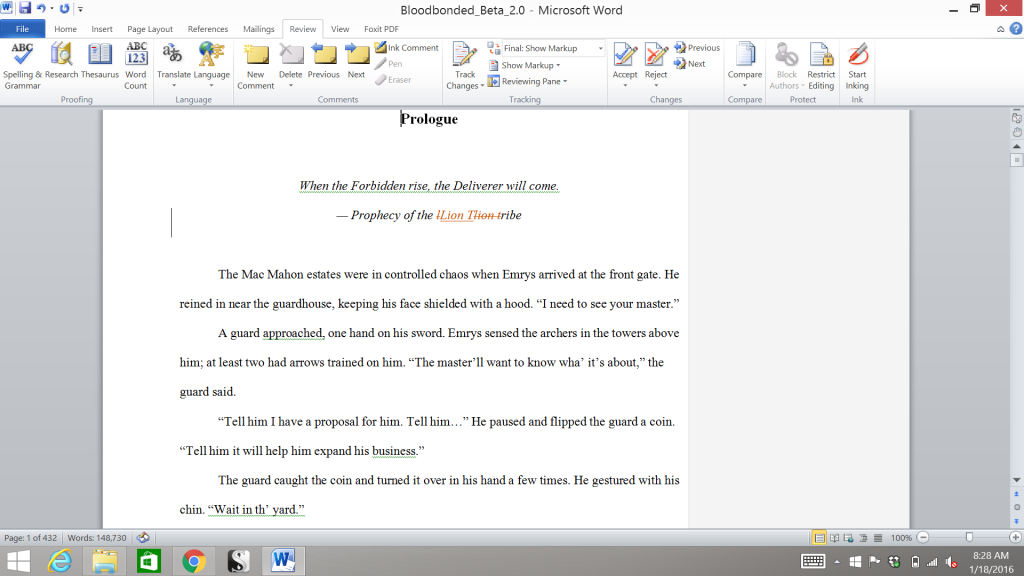 That’s the opening page of Bloodbonded. It’s open. For reals. I got enough feedback from betas that I feel like I can move forward with this next edit.

The feedback was unexpected, to be totally candid. I expected a lot more of it, for one thing, in the sense that I expected a lot more mark-ups, suggestions, criticisms… But a lot of the suggestions are more like line edits and requests for clarification. One character needs a little tweaking, and there’s a smidge of timeline adjustment to be done that involves the addition of a short chapter, but no one had any issues with plot, which was kind of a surprise.

So… onward, I guess.

I think Bloodbonded will have more appendices and references for the world than Ravenmarked did. I met with my map artist yesterday, and she’s going to tweak the map from Ravenmarked and create two new ones for me. And at the request of two betas, I’m going to create a character index (that will probably be integrated with the glossary). I’m also going to write a short history of Taura to give a bit of insight into why things are the way they are, but it will be in the style of the resident historian in the book, so it should be fun to read (I hope). Maybe someday this can all be fodder for my own “Guide to The Taurin Chronicles” reference manual.

I don’t want to put timelines on anything for a while. I don’t know how long this edit will take, and I’m not sure it will be the last one. But here’s the order of how I plan to approach things:

While I’m drafting the last three books of The Taurin Chronicles, I intend to publish some more short works. Several folks have asked for more Ian stories. I think he needs a couple more novellas. And I still have that dragon western languishing on the hard drive–a whole novel and a half in that world. Those novels are much shorter than my epic stuff, so I might be able to actually get that first one out before I publish Unquickened. It won’t mean I’m not working on The Taurin Chronicles, though. Promise.

Bryce (my hubby) and I have been talking lately about careers and income and such. We aren’t exactly in the homestretch of parenting young people, but we can see the homestretch just down the track apace. Our youngest one just turned 11. She’ll be in middle school next year. Our second high schooler will have her driver’s license in about a year. Our oldest son graduates from high school next year. We’re kind of approaching that point where we don’t have to drive everyone and be everywhere all the time. Plus, my time should open up a bit after June (when I’m done with my volunteer job). The upshot is that while I’m by no means done with this mom gig, I’m kind of looking at what my role will be in a few years, and I’m wondering if maybe it’s time to give this writing thing one more shot.

I am such a flibbertigibbet.

(Or maybe not so much, because I looked that up to make sure I spelled it right.)

(Also, it was in the dictionary.)

Okay. So. I tried going back to commercial freelancing a while back, and it didn’t work. I don’t know why. I am 90% sure it was me. My heart wasn’t in it. But still, I did try, and I just couldn’t really get it off the ground. I think clients and potential cients can tell when your heart isn’t in it. The skills were still there. I said the right things. I made phone calls. I sent e-mails. I followed through. And still, things just didn’t really launch.

It’s true that the market is vastly different than it was a few years ago when I was basically freelancing full time, but still–there is copy to be written, and there are clients to be found, and I didn’t manage to do that. I think the truth is that I just would rather write fiction.

I would rather write fiction than anything else.

So I don’t know. I don’t know what that looks like. I know intellectually that I can’t make a living at this fiction-writing thing. I know that I won’t ever get an agent or publisher (not that I’d want them–I’m sort of done with that world after the one experience wherein I flirted with the dark side. That was probably my Luke Skywalker moment). I know this road isn’t for the faint of heart, and I am plenty faint most of the time. And I know that twelve fans is not enough to make a career.

And it would be nice to contribute a little bit to the retirement accounts and college expenses.

So even though I don’t know what it looks like or how I’ll promote (or not promote) myself or whatever, I guess I’m going to give this thing one more go. And it’ll be slow and painful, most likely, and it’ll be two steps forward and one step back for my whole life, because that’s how I do writing, but…

And so it begins.