I am late coming to this book, but I have been a fan of Stephen Lawhead since the 80s. Although I love his work, for some reason, I don’t tend to seek it out. But when I was perusing the fantasy section of our local library several weeks ago, I saw this cover, and I had to check it out. 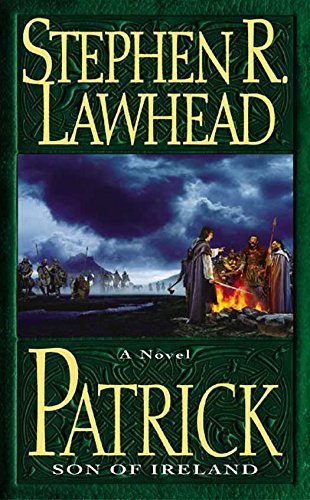 It’s safe to say that almost anything with a Celtic setting or theme is going to spark my interest and draw me in, and many of Lawhead’s works have those things in abundance. Reading Patrick was like visiting an old friend; I was instantly back in the world of Lawhead’s Pendragon Cycle or Song of Albion series or King Raven Trilogy. Lawhead’s books are meticulous in their detail and setting and lush in language.

One thing that rings true about Stephen Lawhead’s books: they are never quick reads. Compelling, rich, lush in prose and detail–yes. But quick? No. Lawhead’s writing is so delicious that one has to savor it. It can’t be rushed.

It did take me a lot longer to read this book than it should have, and in a way, I was grateful for being very sick one Saturday so that I had an excellent excuse to just devour the remainder of the book.

Patrick is essentially a fictionalized account of the life of St. Patrick. It begins with Succat, the 16-year-old son of British and Roman nobility, and follows him through seven years as a slave in Ireland, back to Briton and then to the Roman Empire, and eventually to Ireland again as a missionary to the people there.

Lawhead takes a lot of liberties with what we do know about Patrick, but everything he writes is entirely conceivable. He assumes that the young man Succat was fairly educated and able to speak Latin, which would have made him stand out in Ireland as someone who could be useful in negotiating trading deals. He engineers encounters with a Druid named Cormac, who invites Succat to enter training as a Druid. And he gives Succat a love interest–Sionan–who is entirely believable. From Ireland, Succat eventually makes his way back to Briton and then to the Roman Empire, where he serves in the army against the Goths and distinguishes himself enough to marry into Roman nobility back in Rome. Lawhead uses a plague to separate Succat from this new family, and in his grief, he encounters the vision that sends him back to Ireland as a missionary of Christ.

Historical fiction is always tricky, because it’s possible to get so many things wrong or make so many things unbelievable that even the truth can’t be believed. It’s also possible to go the other direction, sticking so closely to fact as to make the book more of a biography. This book treads that line fairly well. St. Patrick’s own writings, especially his Confession, suggest a life that was miraculous in its own right. Lawhead’s account actually makes St. Patrick more believable, I think, and grounds his life in the realities of early Britain and the late Roman Empire.

As I said, Lawhead is a master of prose, but don’t go into his work expecting a quick read. However, if you like to sink into a story that offers plenty of meat, he’s an excellent option. He combines the best of J. R. R. Tolkien’s ability to paint a setting with George R. R. Martin’s skill at creating characters–and killing them off. I said to my husband at one point that Lawhead is almost as brutal as Martin when it comes to death count. Fortunately, Lawhead tends to paint a more optimistic picture overall than Martin.

Everything is clearly well-researched. Lawhead lives in the UK, and one can sense that he has been to the places (or similar places) he writes about. He gives an excellent summary of the lives of different people from the ancient world–everyone from the Roman and British nobility to the Irish principality to the Roman army to Rome itself.

This book is rich in detail and character development. While not heavy on dialogue, and while there are some very long passages where Patrick is venturing alone and nearly starving to death, the book is never boring.

And one more thing… I tend to stay away from books written in first person narrative, largely because I have trust issues. If a book is in the first person, I almost automatically distrust that narrator. I didn’t feel that way with this book. I had the sense that Succat/Patrick was being reliable and honest with his audience–maybe because he often portrayed himself in very unfavorable light. In any case, the first person narration here is very well done.

One thing I have always loved about Stephen Lawhead is that he doesn’t shy away from the realities of humanity even as he remains true to his faith. This is the approach that I’ve always tried to take with my fiction, and it’s always been such a struggle to reconcile or explain it to people who think that Christians should only write Christian fiction.

Stephen Lawhead writes Christian stories in that he tells stories about very flawed human beings who find redemption. In Patrick, Lawhead shows us first a young man who indulges all of his basest desires with his friends, then a man who lies and maneuvers his way into positions that only serve his own goals, and finally a man who learns to sacrifice his own safety and comfort for the good of those he loves. Patrick’s shortcomings are never glossed over, and Lawhead never pretends that violence doesn’t exist in the brutal ancient world.

Lawhead seems to understand that the way to tell a story is to tell all of the story–even the messy parts. His books tell the truth–even the truths that are hard to hear.

I always recommend Stephen Lawhead. This is a great addition to his bibliography and one well worth reading.

Will I Read More of This Author?

Yes. And looking at his bibliography, I think I have some catching up to do.

I’m not sure. I picked up some free books at our local library, but none of them were fantasy or science fiction. I’m working my way through a Jan Karon novel right now, which is surprisingly not as quick a read as I thought it would be. And I have a few more non-fiction books on my list, and the next few weeks are going to be very busy. So… next on my list might just be surviving until November.