Well, I am FINALLY getting around to writing my review of The Martian. I already talked about this book a bit in a previous post, but that was more about how a whole bunch of things came together at once. So without further ado, my more complete thoughts on The Martian, by Andy Weir. 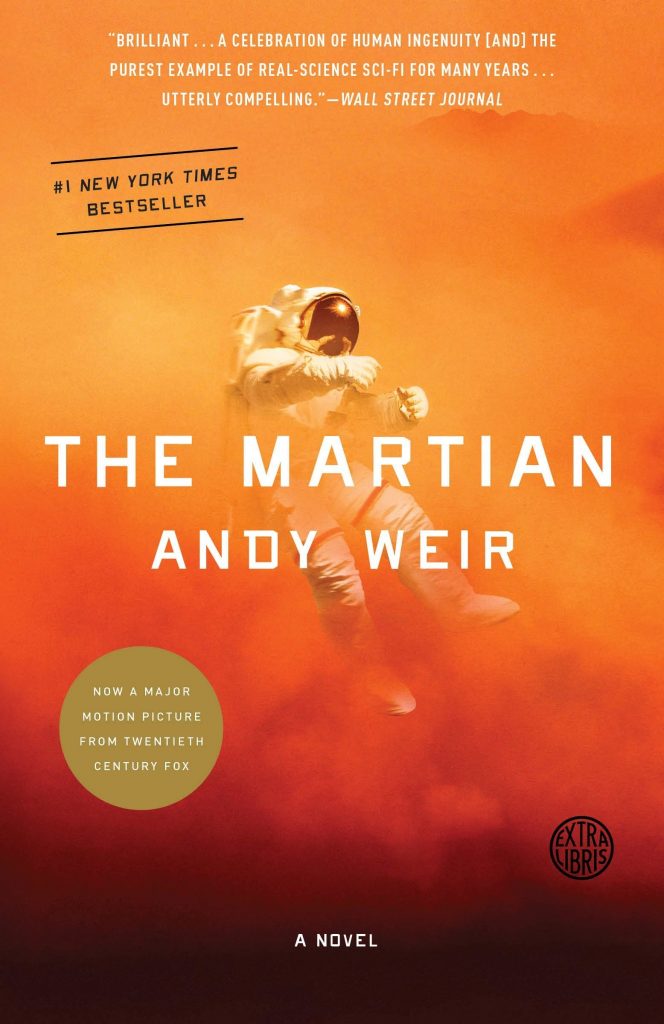 I loved this book. I devoured it. Having seen the movie first, I couldn’t help but read it with the movie in mind and the voices of the actors in my head. However, because the movie is so similar to the book, reading this way only enhanced the experience. I would highly recommend this book to anyone who likes a good, accessible science fiction/cast away rescue story.

It was hard to put this book down. According to Goodreads, I shelved this book on June 4 and finished it on June 19, but I think I actually started reading it on June 12. So basically, it took me a week. It was a week when life and work kept interfering with my desire to sit down and just plow through this story with no interruptions. Why can’t the world just let me hide forever with my books and my yarn??

In any case, this was a book that felt too short, even though it was an entirely complete and satisfying read. I didn’t want it to end, even though I had tiny quibbles with a few things.

Let me state for the record that I am not a scientist. I only know enough about space and space travel to be remarkably dangerous. I would not be the person you would want around for answers to questions on botany, engineering, or aeronautics.

Now that we’ve done the level setting… I found most of the science in this book entirely believable. I did read a few things about how Weir took some creative license, such as with wind storms on Mars, but these things do not bother me. Because I am not an expert in anything, I am easy to please when it comes to most subjects. For someone who is more knowledgeable in the science, these quibbles might be enough to impact enjoyment, but I am not that person.

I will note that in the movie, Mark Watney had a PhD in botany, but in the book, he had a Master’s degree in botany and a Master’s in mechanical engineering. In the movie, Watney seems entirely comfortable fiddling with the physical systems and structure of the equipment. I assumed that his comfort level was just due to thorough training from NASA, but giving him an advanced degree in engineering makes his comfort level more believable.

One thing Weir did especially well, I thought, was to develop characters with short brushstrokes. Granted, I could have been accessing the actors’ depictions to some degree, but so many things in the novel humanized the characters and made them more than just brainy NASA geeks. Commander Lewis’ affection for all things disco, Beck and Johannsen’s quietly burgeoning relationship, Vogel’s obvious care and concern for his family back home, Martinez’s sometimes outrageous comments–all of these things fleshed out characters who didn’t have a lot of “screen time” in ways that gave a clear picture of who they really were and added depth to the camaraderie of the crew.

My biggest quibble with the writing was some of Weir’s dialogue. Anytime he got out of the comfort zones of writing in Mark Watney’s first person diary entries or discussions among the NASA/JPL characters, the dialogue seemed to be a little more stilted. Dialogue comes easy to me, and I’ve been told I write it well, so maybe that’s why it felt off to me at times. But also, because most of the awkward dialogue occurs between geeky NASA types, it could just be that geeky NASA types talk in stilted dialogue when they’re outside their areas of expertise.

This really was genuinely a quibble, though, and the occasional awkward dialogue didn’t really impact the enjoyment of the book.

There are really two ways to look at this book: science fiction and man vs. nature. In one sense, this is very much a science fiction book, but I would call it “soft” science fiction. This is accessible for the layperson, because you don’t really have to understand or even read the science pieces in detail to enjoy the book or the movie.

But to me, this book is much more a man vs. nature book. This is a classic story retold in a near-future world where space travel to Mars is doable and almost common. And in that context, Mark Watney is the perfect hero protagonist.

One thing that makes a castaway-type story compelling is when the castaway is comfortable with a solo life–when the hero is able to be alone and process thoughts and ideas in a compelling way for the person who’s consuming the story. Tom Hanks demonstrated this idea brilliantly in Cast Away, and I’ve often said that I don’t think anyone else could have played opposite a volleyball on a desert island as well as Tom Hanks.

And I have to say–the more Matt Damon movies I watch, the more I like him as an actor. But the thing about this book and movie is that there is almost no daylight between the Mark Watney of the movie and the Mark Watney of the book. Damon captured Watney so perfectly that if I had read the book before I saw the movie, I might have actually pictured Damon in the role.

Will I Read More of This Author?

Yes, probably. Science fiction isn’t my first love (no surprise there!), but I am intrigued enough by The Martian that will put Weir’s other work on my TBR list.

My next fiction read is TBD. I’m not sure what I’m going to read right now. Summer is insane, I have a pile of non-fiction waiting, and I’m still trying to finish my own projects. I did just finish The Time Machine, by H. G. Wells, but it didn’t impact me enough to write a review.

In the meantime, I hope you’re all having a lovely summer, and I’ll be back next week with… something as yet undetermined… Stay tuned!