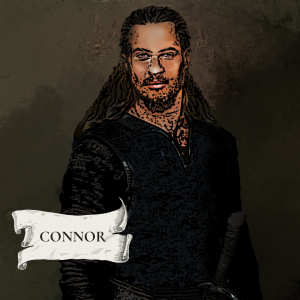 At the beginning of Ravenmarked, Connor is about 27 years old. He’s the son of the disgraced Duke of Kiern, Culain Mac Niall, and the Queen of the Brae Sidh, Maeve SilverAir. Because his parents were never married, he could not inherit his father’s estate, so he became a freelance bodyguard/mercenary.

Connor originally believes that he has very little Sidh power; he can only weave rudimentary air braids at the beginning of Ravenmarked. He later discovers that he is actually very powerful in the Sidh magic and has all three talents; his mother put blocks in his blood to keep him from becoming too powerful, but he breaks through them eventually.

He is also tied magically to the avenging spirit of the earth, the Morrag; the Taurin tribes refer to this as the ravenmark. The combination of his ravenmark, his Sidh power, and his education and training in martial arts make him a formidable foe.

“I have faith in myself. When I rely on myself, everything is perfect.” – Ravenmarked, Chapter 13

“You want my lands? Come and take them.” – Unquickened, Chapter 14

Connor was never supposed to be the main character of this series, but once he entered the picture, it was far too late to keep him from taking over.

This entire series started with Mairead—a vision of a woman in white running from a burning building. I needed someone to escort her, but I always thought she was the one who would be the central character.

The problem with Mairead is that she doesn’t have enough of an arc. She’s too perfect—too good. I certainly tried to find her weaknesses and exploit them for the sake of building her character (more about that when I write her profile), but Connor came with baggage, and he showed up willing to spill his guts.

A Disturbance in the Force

Have you ever been at a party or event when someone you don’t know enters the room and everyone—I mean everyone—reacts?

We’ve all seen someone like this—someone with a larger-than-life personality, someone who just saunters in and takes over, whether he wants to or not.

I don’t think Connor intended to take over. I think he just couldn’t help it. He basically walked onstage, looked around, and said to me, “listen, I know you think you know how this is going to go, but you’re not even close. I have some things to tell you, and you’re going to translate them into a story.” And from there, I was effectively his prisoner.

By the end of Ravenmarked—even the very early versions of Ravenmarked—it was obvious that this whole series would hinge on Connor Mac Niall and his character arc.

I’ve said for a long time that I don’t really believe in a perfect black and white, hero/antihero division. I think of it more as a hero spectrum—perfect white hat heroes on one end, antiheroes on the other end. (I do think villains are different, but there’s a villain spectrum, too—everything from the “just following orders” villain to the “pure malevolent force” villain.)

Connor did not start out as a hero. He started out as a jaded, angry antihero who thought the world had very little to offer him. All he wanted was money, women, and freedom, and he worked as a freelance to get it. He didn’t want to be a hero. He just wanted to tell me his story. I think he mostly just wanted to show up and air a bunch of grievances.

But even from the beginning, I could see seeds of his core decency. In the first chapter of Ravenmarked, his paramour says that she freed her slaves because he asked her to do so. Somewhere deep down, there was some level of nobility that wasn’t entirely due to his blood.

As I was writing Connor, I thought a lot about Han Solo. Maybe that’s cliché, but there it is—a basically decent guy who doesn’t want to help, but finally does, in part because he just can’t get a certain woman out of his head.

(Isn’t that quote suspiciously similar to one of Connor’s defining quotes?)

And speaking of said woman…

I knew from the beginning that Connor and Mairead would end up together. He was drawn to her the minute he saw her, and not just because she was pretty. I think maybe it took her a little more time, but not much more. Putting them together on a long journey with no one else to break up the monotony set them up to fall in love.

I know that Connor has been in love before. He was in love with Aine, but he didn’t think it would be fair to marry her. He probably had some level of affection for Helene, his paramour at the beginning of Ravenmarked, and my head canon includes several other women he cared about. But I think he saw how complicated his parents’ relationship was, and he feared the Morrag would make it impossible for him to make a true commitment, so he guarded his heart and wouldn’t allow anything too deep.

And then he met Mairead.

Okay, maybe Mairead wasn’t exactly Gracie Hart, but she definitely caught Connor off-guard. He was most assuredly not ready to settle down. He never intended to settle down. He might fight for some noble cause if someone paid him enough, but marry a noblewoman and have children? Never.

Connor’s personal story arc hit a pivot point toward the end of Bloodbonded, when he had his “come to Jesus” moment in the mysterious cabin in the woods. From there, he’s been reluctantly committed to being the hero this world needs.

But would he have come to that point without Mairead? I don’t know. I don’t think so.

Connor’s devotion to Mairead uncovered and restored his devotion to a lot of other things–his homeland, his people, the core principles his father taught him, and even God. Mairead makes Connor want to be a better man.

Make no mistake–Connor is still imperfect, still roguish, and still an occasional jackass.

But with his love for Mairead driving him, he’s no longer centered on himself. He recognizes his role in the bigger, more consequential matters of Taura, and he’s committed to making the world a better place for future generations.

I’m not done making him miserable yet–or rather, I’m not done chronicling his misery. He has more grievances to air. And he and Mairead still have a long, hard road to walk as a couple and in their own hero journeys.

But I think at this point, it’s the right road. It’s the one he’s supposed to be traveling.