How in the world did a month go by without a blog post?

I mean, I know I’ve gone much longer than that in the past, but honestly–that was not my intention! I guess I just… missed some weeks? Web Goddess Robyn says I should do a repost on those days when I can’t write something new, and she’s 100% right, but to be completely candid, I just sort of forgot I even had a blog.

We have definitely been incredibly busy. Besides the continued unpacking and setting up the house, we also enjoyed a visit from our son’s family, which was hectic and crazy and fun all at once.

But now the house is (mostly) set up, if not really decorated, the one kid who still lives with us is busy with a job and preparing to start a new school, the massive heat wave is over, the big summer events are over (just one weekend camping trip left), and we feel like we can finally focus on settling in.

I genuinely believe that part of the reason I went a full month without blogging is because of the mental space I’m giving myself right now. When I realized how overwhelmed I was with the promotion side of things (in combination with everything else going on in my world), I think my brain just said, “nope, no social media, no blog, no posts of any kind for a while” and then shut down that side of things.

And you know what?

Giving myself that mental space helped me figure out what’s really wrong with Unquickened. 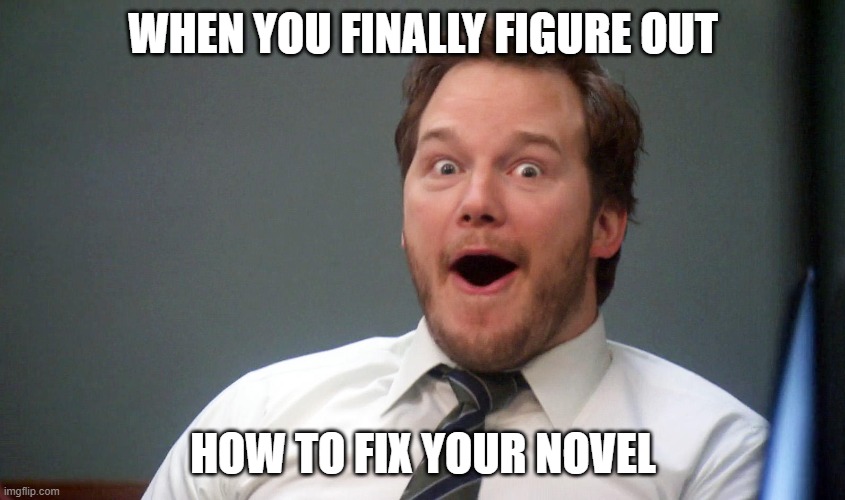 The Thing I Forgot in Unquickened

Giving my brain a rest–some space and some quiet–helped my Muse to pipe up and say, “hey, moron–you forgot the antagonist.”

I discovered the problem when I was re-reading some of the opening of Unquickened for the 416,729th time. (I may have undercounted.) I have read and re-read and re-re-read these bits over and over and over, and only when my brain had some space to really untangle the problem could I see it.

I forgot to add an antagonist.

It’s not quite that cut and dried. I mean, there are really a few antagonists in this whole saga, and there’s the one major behind-the-scenes antagonist.

I realized that the Big Baddie was not the right specific antagonist for Unquickened.

For one thing, the Big Baddie’s real fight is with Connor, and their showdown won’t happen till the end of book five. Since Unquickened focuses more on Igraine’s story arc, I need an antagonist who is really fighting to keep her from getting what she wants.

And that’s what I forgot to add.

I suppose in some way, Rory Nolan is a bit of an antagonist. When I sent Igraine to live with him at the end of Bloodbonded, I knew that he would be an obstacle to her reuniting with Braedan. But Rory’s motivations aren’t really the same as a typical antagonist. He loves Igraine and wants to protect her, so he’ll do things to keep her safe that interfere with what she wants. However, he also would help her get what she wants if he thought she’d be safe in the process. Maybe it’s more like he slows her down than really completely blocks her from her goals.

Igraine needs someone actively working against her.

And fortunately, I have the perfect candidate–someone who needs some loose ends tied up, anyway.

This is challenge number one.

Meanwhile, Back On the Plains…

While I’m creating all the chaos on Taura, I’ve left Mairead back on the continent. As she deals with grief from losing her baby and the strain of being married to a man who can’t stay in one place, she finds that the lion tribe is expecting her to help repel the threats to their existence in the mountains and take them to the plains.

(I’m starting really understand why it takes so damn long for authors to finish these epics.)

I have thought about leaving a placeholder or two for Mairead and coming back to her story later in some other book, but I like having Mairead and Igraine in the same book. I have always seen Mairead and Igraine as foils for each other. Mairead is entirely human, even though she has some supernatural connections. Igraine is another creature entirely who has learned her humanity. Mairead is a royal by birth, but raised poor and common, and she doesn’t act the royal. Igraine was born outside of royalty, but raised a princess, and she has entirely internalized the power that brings. Mairead has always wanted a family–husband, children, goats and chickens–and a quiet life, whereas Igraine grudgingly accepts that she may have to marry and raise children, even though she wants to make a big difference in the world.

In some sense, neither woman gets what she wants–or at least, she doesn’t get what she wants the way she expects. I think it’s helpful to the narrative to juxtapose them. I like being able to write Igraine’s frustrations at not having power against Mairead’s fear of too much power that she’s not ready for. I like showing Igraine’s hesitation at having anything to do with children against Mairead’s pain of losing a child and fear that she won’t have another. I think this is part of writing real women–showing the wide range of thoughts, feelings, experiences, fears, frustrations, and methods of dealing with all of those things.

In any case, the struggle with Mairead’s story in Unquickened is to give it enough meat to be believable, but not so much meat and so many pages that it takes over the whole book. It’s also tough to figure out exactly what the right pacing is for her story against the rest of the story. Most everyone else is on Taura, and she’s on the continent in a sort of side quest.

And Then There’s Connor

It always comes back to Connor. He’s really the overall main character of the series, I think. That wasn’t how I intended things. It’s just what he demands. He’s obnoxious that way.

On the bright side, because he has particular talents and abilities, it’s easy to just stick him where the action is. He has multiple ways to get where he needs to be quickly, and since he’s the linchpin of this whole thing, it’s easy to find an antagonist wherever I put him. He sort of brings them along for the ride. And finally, because he has such a big personality and so much authority on Taura, he draws the action to him, and no one questions when he shows up on scene.

But on the other hand…

Because it’s so easy for him to take over a scene (or a whole book), I keep having to rein him in. I keep pulling him back and telling him to wait. And I keep swatting him down when he’s tempted to rescue Igraine. That’s not his job. He needs to just back off.

He finds that difficult.

Honestly, if it were up to him, he’d throw Mairead over one shoulder, charge into the throne room in Torlach, kick everyone else out, and then gently place his wife in the seat and guard her against anyone else who might challenge her authority.

Of course, there are a lot of obstacles to that chain of events… not the least of which is that Mairead has told him in no uncertain terms that her allegiance is to the lion tribe, not Taura…

This is challenge number three.

The Value of Mental Space

So this is where Unquickened stands at the moment. I have not done much actual writing or editing on it lately, but giving my head some peace and quiet has helped me untangle why this book is so tough to… well, untangle.

With summer on the downhill now, I’ve taken a couple of days to think through my schedule, goals, plans, etc. I’ve come up with something of a plan going forward to help me manage my time and energy better, but I’m also trying to remember that nothing is every perfectly clean or smooth in this crazy life.

What I DO know, though, is that I need to be sure to keep allowing myself some mental space. While I completely appreciate how important social media marketing is, it will do no good unless I write the book. And if social media is interfering with my ability to finish the book, well, it’ll be the first to go.

So that’s (sort of) where I am at the moment, and now you all know a little more about why this cotton-pickin’ book isn’t done yet.

It WILL get there, though. I promise you it will.

And as they say, once more unto the breach…

4 thoughts on “Figuring Out Some Things…”