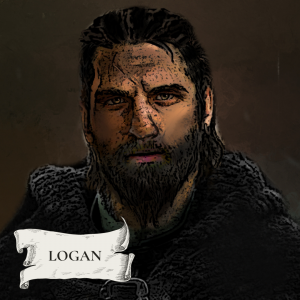 We meet Logan right at the beginning of Ravenmarked, when he is serving as commander of Braedan’s forces during Braedan’s coup d’etat. His age is never defined, but he presents himself as a man probably around 30 years old. He had served in the Taurin forces during the attack on the Mac Niall estates several years before Braedan’s coup, but because he disagreed with the attack, he deserted and fled to Culidar to join Braedan.

From the beginning, it’s clear that Logan is a bit of an enigma. He strikes up a friendship with Igraine, and she discovers that he is freeing the captive sayas one at a time. He remains otherwise loyal to Braedan’s goals, however, eventually setting out to find the king and bring him back to Torlach to reclaim his throne from his uncle.

The first hint of the dual nature Logan inhabits comes in Bloodbonded. He spends a lot of time reminding himself that the Sidh magic he has is not his own and the memories that plague him are not all his. Another clue comes at the end of the book during the confrontation with Aldora, when she calls him “Hector,” a name of one of the Forbidden from myth and legend. Logan is, in fact, one of the Forbidden–a half-human, half-Syrafi creature born before the breaking of the world. His name was Hector for hundreds of years, and he was as evil as the creatures he’s now fighting to defeat.

Logan believes himself damned. He believes there is no possibility of redemption for one like him.

“I’m not afraid of death. I’ll die in service to those most important to me.” – Ravenmarked, Chapter 22

“Taura is waiting. She stands on a precipice. And every moment that you tarry here in a battle of wills with an obscure duke, listening to the whispers of a demon, you endanger the woman you claim to love the most—your own country.” – Bloodbonded, Chapter 31

“And someday, when the ravenmarked find me—as they will—I will be destroyed knowing that I did what I could to further good works in this world.” – Unquickened, Chapter 5

When I pantsed my way through the first draft of Ravenmarked back in 2009, I sort of envisioned Logan as Braedan’s conscience. There have been moments in the series–some published, some unpublished–where Logan gave Braedan advice that was in direct conflict with the advice others gave him. As dark, brooding, and mysterious as he was, he had a pretty clear sense of right and wrong, and I thought that he would be a good anchor for both Braedan and Igraine.

But the more I wrote, the more I started to ask questions about how Logan became the man he was. I knew that he had a child (or a child he called his own), I knew he’d been at Kiern when the Taurin government accused Culain Mac Niall of treason and attacked his holdings, and I knew that he’d left Taura to serve Braedan. Otherwise? I didn’t have much to go on.

That’s where it started to get interesting.

After I vomited out the first draft of Ravenmarked and started fleshing out the details, I realized I had too much story for one book. So I split it into two, and the initial draft of Bloodbonded was born. Then I realized that it was going to take more than two books to tie up all the loose ends I was creating, so I started thinking about the characters and where they were going.

That’s when I realized that five of the six main characters needed their own development. I knew that Ravenmarked was Connor’s story and Bloodbonded was Mairead’s story right away, but there were three others who needed a character arc. I thought Igraine was the next logical person to focus my attentions on, so I assigned Unquickened to her.

But I knew–the series wouldn’t be done at three books.

And a couple of characters still needed an arc.

And there was Logan, with his conviction that he was utterly irredeemable, and I knew that Logan needed a book of his own.

We All Got it Comin’

This is going to get Jesus-y. Bear with me.

There is a lot of my faith journey in these characters. Mairead is the “good church girl” part of me–the part who needed a hefty dose of reality. Connor is the “belief that” versus the “belief in” part of me; his “I believe God exists, but we’ve agreed not to pester each other” approach to life has been a part of my journey. Minerva is the overthinker who wants a sign, who intellectualizes everything even as she hopes for some clear direction. Braedan is the one surprised by faith and joy. And Igraine is the reluctantly obedient follower.

But Logan represents something I didn’t understand for a long time. Logan was the one convinced that he could not be redeemed. He believed and acted to promote the Kingdom of God while also believing that he could never partake of it himself.

As a good church girl, I grew up parroting the idea that there was no sin bad enough to keep anyone from repentance and regeneration. I was taught that the unforgivable could be forgiven. I said those words–I said that there was no one so bad that he or she could not approach the Throne of Grace and receive forgiveness.

But I didn’t have to believe it until it hit where I lived.

And then I had to admit even further that when I looked in the mirror, I was also unforgivable.

William Munny sums it up nicely in this brilliant scene from Unforgiven: “We all have it comin’, kid.”

Logan gets it. Maybe Connor gets it a little bit, too, but Logan knows in the depths of his spirit that no one deserves forgiveness. He believes that God bestows forgiveness, but he doesn’t believe it’s for him. He thinks his sins are so heavy, so evil, so unforgivable that he cannot be forgiven, and he knows that none of his acts–no matter how noble, good, or redemptive–are good enough to balance the scales.

Someone asked me if I believed people could change, if God could forgive the unforgivable. I said I have to believe that. My faith requires that I believe that. My faith dictates that on this side of the veil, there is no one so bad, so far gone as to make redemption impossible. God is never more than a breath away from reaching down to snatch a repentant soul from the gates of Hell.

I think this perspective is best summed up in this scene from Amazing Grace:

If you don’t know the story of John Newton, you should. After years of participating in the African slave trade, he had a radical “come to Jesus” moment in the middle of a storm. Even after that, it took some time for him to renounce the slave trade and turn fully to Christ, whereupon he became a cleric and wrote the most famous hymn of all time, “Amazing Grace.” By the end of his life, after working to abolish the slave trade that he had once participated in, Newton understood what a great sinner he was–and what a great savior he served.

In a sense, Logan is right. No matter how many good deeds he does, he cannot balance the scales or achieve redemption. Good deeds will not erase the past, and grace is not bestowed because of good deeds.

I know this is a weird profile. It’s tough to write a real profile of Logan without giving away too much (I’m trying not to share spoilers!), and his story is the one with the most Jesus-y redemptive arc. I tried to write this without getting too religious, but it just wasn’t honest. So here you go. I hope it didn’t scare any of you off.

See you next week!