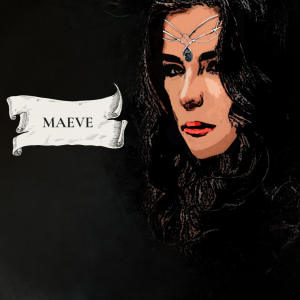 Like all good Fair Folk of myth and legend, Maeve’s age is undefined. She has referred to being far older than most of the other characters in the book, but it’s unclear exactly how old she is or when her reign began. I’m sure those things are written down somewhere in Sidh documents, but the Muse hasn’t let me peek into those.

Maeve’s reign of the Brae Sidh was generally quiet until about thirty years before the events of Ravenmarked. Though there was ongoing strife between the tribes and the Sidh, they had reached some level of uneasy truce once she ascended the throne. Her mother, Niamh, was the driving force behind the ongoing feud, and once Niamh was gone, things settled down until Fergus Mac Corin became Regent of Taura.

Maeve met Culain Mac Niall and Edgar Wolfbrother at the same time. Culain was married at the time, and when he sensed himself falling in love with her, he cut off their relationship. Edgar pursued her, but she saw Edgar as a friend and reluctant ally, not as a lover. When Culain’s wife died, Culain and Maeve struck up their relationship, and Connor was the result.

Maeve is utterly devoted to protecting her people, but she is more interested in the human world than any of the previous Sidh queens were. Maeve sees herself as a liaison between the Sidh and the world of man, especially since her son is half-human. She finds her loyalties pulled in multiple directions often, and while her sense of duty keeps her bound to the Sidh, she is not averse to meddling in the affairs of the tribes and the Taurin throne.

“I will not be taken to task for my choices by a kirok-raised whelp who thinks only of warming my son’s thighs.” – Ravenmarked, Chapter 20

“We are different women, you and I, but we share two things: my son and your child. Whether you wish it or no, the child has my blood, too. I will ensure that you and she are always cared for, even if no one else does.” – Bloodbonded, Chapter 20

“But the wards and protections around Taura are fading, and swords and might can only do so much when the battle is in a realm beyond this one.” – Unquickened, Chapter 21

When I first started writing Ravenmarked, I knew right away that Connor would be half-fae, half-human, and I knew it he got his fae side from his mother. But I didn’t want to entirely retread the history and lore of the various iterations of Fair Folk. I wanted to twist them a little–make their role in the world slightly different, give them a different kind of magic. As I started writing the lore and history of Taura and the Brae Sidh, it became apparent that they would have a somewhat matriarchal society, and so I started to develop Maeve’s character around that idea.

But as with most of my characters, Maeve had her own ideas about who and what she was. A lot of her character development came through conversations with Connor, and I think I realized that, as much as Maeve would blame his stubborn nature on his father, a very large portion of it came from her.

At first, I wanted the Brae Sidh queen to be entirely devoted to her own people, to completely eschew the world of men with the exception of her human consort. I also wanted her half-Sidh child to be protective of her and committed to doing what she needed him to do to help her.

They both had other ideas. Maeve was clearly no shrinking violet who was content to follow duty and tradition in her role as Queen of the Brae Sidh. I quickly recognized that she had no compunctions about meddling in the affairs of men, and as I wrote her backstory, I also realized that she really was never even attracted to Sidh men. While she never clearly expressed this preference, I noticed that every man she was attracted to was human.

And as for her son, Maeve always wanted him to be more devoted to the Sidh, and he always resisted her. His father’s insistence that he be raised as a noble son, despite his illegitimacy, meant that he would always be steeped in human tradition and training. And because of his father’s friendship with the tribes, Connor had an early introduction to earth magic, tattoos, and tribal traditions, and he was drawn irrevocably to those things.

Maeve learned to walk fine lines between duty to the Sidh and attraction to the human world. She knows she has certain obligations to the Sidh, and she meets them as much as possible, but she is drawn to the world of men far more than she would care to admit.

One of the most fun parts of writing Maeve has been exploring her relationship with her adult son. When I started writing this series in 2009, my oldest son was ten and my younger son was six. So much of raising them was just me learning about boys. I only had sisters, and I only had one boy cousin who I was even semi-close to, so I just honestly didn’t know much about what boys were like. When I was dating The Man, I would watch and listen to his interactions with his brother and just shake my head in confusion. They would inevitably start wrestling with each other at some point, and my future mother-in-law would just laugh and shake her head. I wondered how she could be so sanguine when her living room was at stake.

And then I had boys.

I don’t care what anyone else says. I had two boys and two girls, and boys and girls are just different. In some ways, my oldest son and youngest daughter have very similar personalities, as do my older daughter and younger son, and yet still–they are just different. Boys are just inherently loud, and if you can’t hear them, you should probably check and see what dangerous thing they’re setting up before an arm gets broken. I cannot tell you how many times I heard “Oh Mommy, that won’t happen” right before it did and someone needed ice or a bandage or stitches.

But there are also so many great things about boys. Mine are now 23 and 19, and I see a lot of The Man in both of them, if in different ways. Sometimes I see a picture of one of them next to an old picture of The Man, and my throat kind of catches, because aside from my eyes and maybe my cheekbones, they are entirely their father. And it’s not that I spend a lot of time arguing with either of them at this stage of life, but when Maeve and Connor fuss at each other, it feels like me and one of my sons fussing at each other.

One of the hardest things for Maeve to do over the course of these books is to let Connor go–to acknowledge that he’s not going to be exactly the man she wants him to be or do everything she wants him to do. This is one of the hardest things about being a mother in general. We put our own dreams on our kids, or we latch onto what they say when they feel most hopeful or most driven, and then when those things don’t happen, it can devastate us almost as much (or even more) than it does our kids.

In order for Maeve to genuinely let go of Connor, I needed to give her other things to hold onto. That’s when Edgar came back into the picture. Edgar makes no secret of his love for Maeve, even from the very first moment he speaks with her in Ravenmarked.

But turning to Edgar, getting her second chance at love and family, finally growing into someone who is not preoccupied by what her son is or is not doing–that required a solid break. When Connor’s will shatters his connection to Maeve in Ravenmarked, it forced her to let go of him–and it created an open door for Edgar to stroll through and sweep her off her feet.

In some ways, I think Maeve is growing and changing more than almost anyone else in this series. Much of her growth has been forced upon her, but in some sense, I think she’s growing in a way that only a woman of a certain age can. We sort of hit a point where we realize, finally, that our control is illusory, and I think Maeve hit that point in Ravenmarked, or at least got pretty dang close to it. She tried some of her machinations in Bloodbonded, but I think when she discovered that Mairead was pregnant and that the baby had all of the requisite talents needed to rule the Sidh, she realized that there is a lot outside of her control. While she certainly grieved the loss of her granddaughter later in the book, she approached the loss of her heir with a certain pragmatism–one that recognizes that we can only do so much to steer things the way we want them to go.

Things take a dark turn for Maeve in Unquickened, as they do for most of the characters. But looking at the arc through the rest of the series, I think Maeve is generally on her way toward becoming a woman I would happily sit down and have a cup of tea or glass of wine with while we discuss our frustrations and joys with our male progeny.