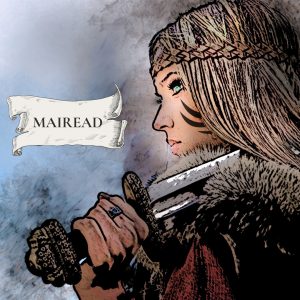 At the beginning of Ravenmarked, Mairead is 20 years old. She was raised by the sayas (nuns) in Torlach after her father left her in their care when she was five. As a widower, Mairead’s father felt that he couldn’t take care of her properly, so he left her where she would be reliably fed and sheltered. The woman in charge of the order at the time, Muriel, recognized that Mairead fulfilled the prophecies about the heir to the Taurin throne, so she took Mairead to the most sacred place on Taura. There, Mairead had a vision of Alshada and experienced an anointing.

Mairead holds the title of the lost heir to the Taurin throne through her father, who was the previous heir. After he left Mairead in the sayada, he eventually remarried and had another child. Mairead doesn’t know about her half-brother, nor does she know the identity of her mother.

Mairead was raised by church women and has a deep personal faith in Alshada, but she also discovers that she is tied to the earth magic through her mysterious connection to the lost lion tribe of Culidar. Though she believes she is entirely human, she can see the Brae Sidh braids, which has led Connor to think she may have some distant Sidh ancestry.

“Go back to your life, Connor. Your women and your money and your sword. I’m sure they’ll all welcome you. But when there’s no woman to warm your bed and money doesn’t satisfy and your sword is just a cold piece of steel, remember what you told me this morning—that it’s not enough anymore.” – Ravenmarked, Chapter 25

“You’re afraid of ruining your reputation or spending too much money or losing a battle. You’re making all of your decisions based on fear. But if you would fight—if you would rally these people—they would flock to you. They want freedom, Henry.” – Bloodbonded, Chapter 5

“From the moment I set foot on this continent, something has drawn me to the people and the land here. I seek to bring justice to the plains and unite the people under one banner—one law.” – Unquickened, Chapter 35

I’ve mentioned it before, but for anyone who hasn’t heard, the entire Taurin Chronicles series started with Mairead. I had a vision of a woman in white robes running away from an abbey, and I needed to know why she was running, where she was going, and who might be helping her or chasing her. As I started to explore those questions, a whole lot more showed up, including Connor, and Ravenmarked was born.

As I said in the post about Connor, I originally intended for Mairead to be the main character of the series. I thought it would be her story–that her role as “The Chosen One” would make her the protagonist and the person to follow. But the problem with Mairead was that she was too perfect to have an arc in Ravenmarked. She had a lot of ideas about how the world worked, and she was (and is) very idealistic, but she needed to be deconstructed a bit.

And Connor was more than happy to deconstruct her.

Well, once he got used to her.

A Character In Search of an Arc

When I say that Mairead had no real arc in Ravenmarked, I don’t mean there was nothing there. It’s just that she was at the wrong side of it, or maybe she was too early in it. She had led a fairly sheltered life as an orphan. The sayas raised her to be essentially a saya. They made sure she was well-educated and expected her to help care for the less fortunate, but other than telling her that she had a role to play in the future of Taura, they made few other demands of her. She grew up a church girl, basically, albeit one with abandonment issues.

What I realized early on was that whatever direction the story took, there was no way I could deconstruct and reconstruct Mairead in the span of one book–not with all the other story lines going on at the same time. That’s when I realized that one of the central themes of this series would be how different people come to faith in different ways.

Mairead had a deep, strong, abiding faith. She didn’t need to have a “come to Jesus” moment–she essentially had that on a hill outside of Torlach when she was five.

No, what Mairead needed was to have her faith shaken.

So Alshada gave her Connor. And all of the challenges that attend him.

There is a lot of me in Mairead. I was also a church girl. I memorized the books of the Bible early; to this day, I am certain I could beat almost anyone in a search for obscure Old Testament references in a physical Bible. I went to Sunday school and church and VBS. I sang in church choirs and played the piano in duets and trios. I listened in rapt attention when missionaries came to update the church on their work and always said I’d be a missionary when I grew up.

So when I started writing Mairead, I drew a lot on my own experiences from my youth. No, I was not orphaned or abandoned in an abbey and raised by nuns, but I was given a very strong church foundation.

And while that foundation served me well, it was not enough.

Mairead discovered through Ravenmarked and Bloodbonded that the platitudes and formulas of her upbringing were not enough to face a life of harsh realities. She expected that she would have the life the sayas painted for her–a marriage of duty and, perhaps, affection, to someone solid and stable, possibly noble, where she would have children to take on the mantle of the Taurin throne and eventually reunite the Three Lands of the West.

But instead, Mairead got:

And in that aftermath, Mairead had to decide: would she believe in what she learned as a child, or would she abandon her faith?

I’m not going to sugarcoat it: the events of Bloodbonded just about destroyed Mairead. Losing her friend and her baby and nearly losing her husband left her broken and lost. At the beginning of Unquickened, she finds it necessary to shake off her mourning and lead again–and not just lead, but lead a group of people who have very mixed feelings about her.

But at the very core of her personality, Mairead is a leader. And she’s strong–stronger than she should be for someone raised in near seclusion. I think Mairead is one of those people who is strengthened by adversity. I suppose we all are in some sense if we allow it, but Mairead seems to almost thrive on it.

And yet, she never loses her idealism or her compassion. Everything she does, she does for a greater good–to serve the people and usher them into freedom.

As I was trying to find defining quotes for Mairead for this post, I realized that one thing I love about her is her willingness to call out bullshit. Somehow, Mairead missed the classes on diplomacy. While Connor can be a jackass and a little rough around the edges, Mairead can be absolutely savage in identifying and stabbing other people’s vulnerabilities. Mairead says the things all of us would like to say, and she doesn’t apologize for it.

Mairead comes into her own as a leader in Unquickened, and as she forms relationships and connections with warriors across the plains, she becomes a force to be reckoned with in her own right–as Mairead, the Marked Empress, a woman who is more than just the wife of a powerful man or the lost heir to an unstable throne.

But in the course of that journey, she doesn’t forsake her church girl upbringing. Rather, she fulfills the promise of it.

As a fellow church girl, I suppose that’s the best one could hope for.