Once upon a time, about a million years ago, I wrote a weekly column for Fantasy Faction where I gave writing advice. Some of it was more basic, like how to use commas, and some was more high-level, like how to develop a character. I really had very little idea of what I was doing, and I don’t know if anyone really got anything useful from that advice, but people did seem to like the column. 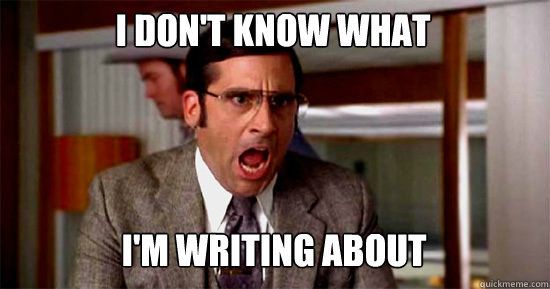 In any case, for whatever mysterious reason, people have periodically told me they like my writing advice. I sincerely don’t know why, because I feel like most of what I have to say about writing fiction has been said before by better, more prolific, and more well-known writers. But because I’m always looking for things to ramble about, and because I’m about to start The Great Marketing Blitz of 2022 in which I promote the hell out of Unquickened and my other works, I decided to start writing down some tips and notions about this weird art. I will likely condense these down into shorter bites for later promotion, but since I was ruminating on them, I decided to put a few in a blog post.

So for what it’s worth, here are several things I’ve learned about writing:

Stop in the Middle

You have probably heard the advice to start en media res, or in the middle of the action. This is good advice, I think, and it still makes a lot of sense.

But my advice is this: stop in the middle.

What I mean is that when you are writing and sense yourself coming to the “end” (end of your words, energy, creativity, ideas, etc.), stop. Stop in the middle of a paragraph, page, sentence, thought. Stop when you still have coffee left in your cup. It’s like pulling into a gas station when you have a third or half a tank left, because you don’t know where the next gas station is and you don’t want to run out somewhere in the middle of nowhere. Stop when there’s still some reserve left in the tank.

Just stop. Put it away. Eat something, exercise, read for a while, make dinner, go out with friends–whatever you need to do to refill the tank. The story will be there waiting when you return, and I promise you that when you read what you wrote before you stopped, you will know where to pick up and start again.

Raise your hand if you’ve ever started some kind of project or self-improvement plan that you abandoned after a few days or weeks, long before you met your goal.

I have no idea how many times I’ve done that, but it’s less than a million and more than fifty-two, most likely. This count includes the number of times I’ve abandoned a story or set a deadline that I failed to meet.

I am not here to beat you about the head and shoulders for not meeting self-imposed goals. Lord knows that would be the height of hypocrisy.

But what I have learned is that writing requires you to commit.

Commit to words–five thousand a week, one hundred per day, 30,000 per month, whatever it is. Commit to days–write six days per week or 25 per month. Commit to the story, to the effort, to a number of minutes or hours every day. Commit to the Muse herself.

The thing about the commitment for me is that it’s not always about an emotional drive. I’m not sure true commitment actually requires love or passion. I’m more convinced that it requires sheer stubbornness–a dogged, relentless mindset that absolutely refuses to let go because dammit, you’ve committed.

Do whatever you have to do to push yourself to the keyboard. Set a timer. Set an alarm. Do it first thing in the morning, before your brain is awake enough to censor you. Do it late at night when the Muse shakes you by the shoulder and drags you to the keyboard. Make your writing space inviting enough to draw you, but not so comfortable that you fall asleep. Turn off your Internet. Shut the door. Commit.

You Don’t Have to Know Everything

I don’t know where writers get the idea that they have to know everything about the story when they sit down to write. So much of the joy of writing is in the discovery. Why do you need to do a detailed character interview and description before you start? Why not stare at your character through another person’s eyes and enjoy discovering along with the people you’ve created?

Some of my favorite moments of writing ever have occurred when I was just typing away and the Muse revealed something to me that I had never realized–a key piece of the world I’d created, or an important character trait, or a diabolical plan that the character kept secret from me.

Writing is discovery. You don’t have to know everything that’s going to happen any more than you have to know who you’ll run into at the grocery store next week or whether you’ll get snow next winter or how many stars will go supernova in your lifetime. Just write. Find out as you go. Enjoy the journey. You’re exploring this brave new world that is using your own brain as a wormhole, so just pilot that starship right through it and see whether you find Vulcans or Borg on the other side.

To paraphrase Aragorn, son of Arathorn, “There will come a day when you can invite the editor inside the gates of your story–but it is not this day!”

Your first draft should be full of wild abandon. Use every adverb that comes to mind. Describe every face the way Tolkien would describe a tree. Insert crazy plot points that trail off into nothing. Make up characters that may die in the next chapter or may take over the story–you don’t know at this point. Just write–purge the story from your head, heart, soul in whatever way possible.

The only way to improve as a writer is to write. A lot. That means writing a lot of shit. You should probably eventually discard more than you publish. But that means you have to write the parts that you’ll discard later. Your first draft is where you put all of the bits that you’ll eventually throw away.

BUT–now is not the time to figure out which parts are the ones you’ll throw away. Now is just the time to put them on the page.

Later–much later, perhaps–you will sift through all of this and find the nuggets worth keeping, and those will be your story.

So there you go–the first of I-don’t-know-how-many parts of what I’ve learned about writing. I hope this is useful to someone out there. I think a lot of my advice about writing can be applied to many things–certainly to anything related to art and creating.

As always, if you like my work, please forward and share. And don’t forget to subscribe on Substack to get updates on releases, sales, and events. There will soon be a lot more content there–for real.